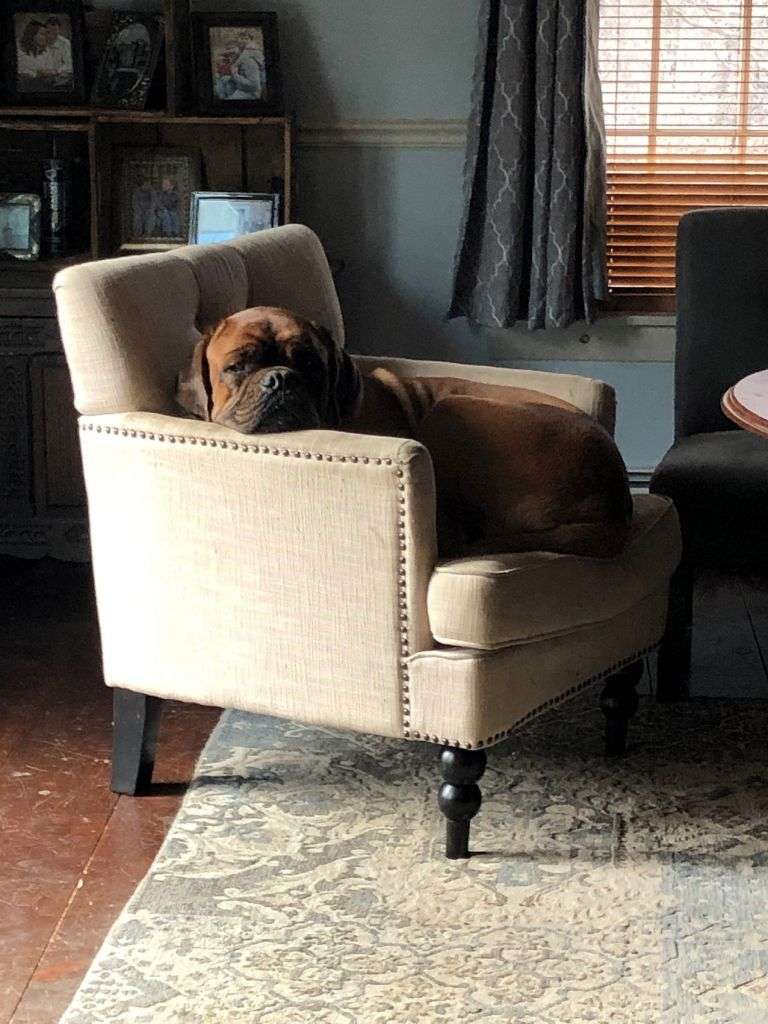 "I like Cheese Balls" said in a deep and slow voice

Animal type: Dogue de Bordeaux
Age: 3 years, 4 months
Bio: Guanche is a DDB who was bred in Spain and flew as a puppy to a breeder in Conneticut. He has competed as a show dog and a stud and was made available for adoption. In the summer of 2021 the Farmer Family was introduced to Big Dog Bordeuxs and met Guanche. It was love at first sight with this 130 pound beauty. He went home with us and has turned into a couch potato and bed hog!

What is your ideal day? Guanche loves laying in the yard, running the fences after cars, alerting to any intruders are walking down the street. He also loves snoring on the couch, squishing his human brothers, laying on his K-9 sister, catching cheese balls, and getting sprays of whip cream straight from the bottle and laying on his mom's lap.

What is your hidden talent? Guanche can catch cheese balls in his mouth after he balances on his nose. He can also prance on leash, and stomps when he is mad!

What makes your pet different than the other contestants? Well, Guanche comes from a breed that was used to fight Germans during WWII. They were ordered to be "killed on site" and at the end of WWII, there were so few left in the world. Guanche is one of two DDB's that I have seen in Maine, and coincidently, Amanda Fournier at KBH has a relative of Guanche's (from the same Breeder).

What is your pet’s biggest pet peeve? Cats and now the leaf blower.

What is your  ideal partner like? His size with a love of chasing cars as they drive by.

What will you  do if you win? He will sun himself on the deck, sitting on his perch and drink Perrier from a stainless steel bowl.

What survivor skills does you have (if any)? Hunting.

How long would you last in the wild before returning home? 6 hours.

What would you do if you were stuck in the house with strange pets all day? Eat them.

Which type of animal would you evict/ vote out? Small dogs and anything that looked like a rabbit.

What luxury item does your pet want? King-sized bed.

Is your pet the type to cry, scream, throw his/her water bowl at another contestant or standby and watch gleefully? No- he would never be so rude!